285 miles, $4.09/gallon gas, and lovely weather — scattered thundershowers, which were a welcome respite after the heat of the Mojave Desert. 80’s and even 70’s as the elevation increased.

Hardest task of the day: Finding ice for my cooler. I had to go to 3 places! Independence Day weekend is apparently a very popular ice holiday. Well, it is the desert.

After a leisurely morning online yesterday, I scampered to catch up and get to the Grand Canyon by mid-afternoon.  I did a quick drive-through Ash Fork, Arizona, one of the Route 66 towns that time has not been kind to. Touted now as the Flagstone Capitol of the World, there’s a few abandoned Route 66 relics still scattered around, and a lot of very friendly people. Everyone waved when they saw me taking photos from the car (that’s not always the gesture I get when I point my camera). At a local community area, kids were having a blast on a slip-and-slide — I remember how much fun we had on those as a kid (and how much my dad hated them because they killed the grass!). One notable Route 66 exception: The DeSoto on top of a now-closed beauty salon. 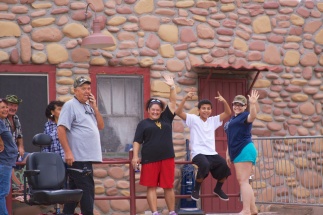 I got the feeling they would invite me to their BBQ 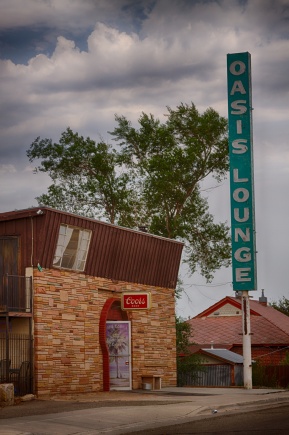 Must have been adorable in its day

I got to Williams around noon and will have to go back there sometime. It’s an adorable town and suitable tribute to Route 66. And cute cowboys… 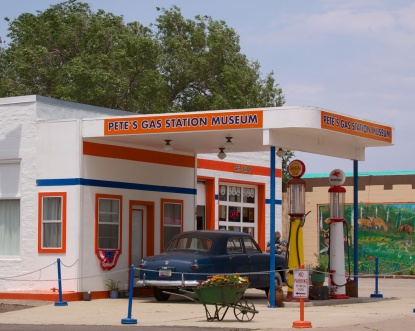 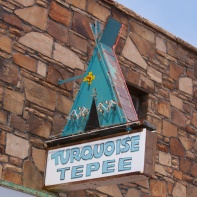 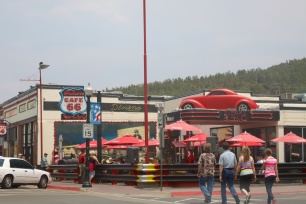 The drive up Highway 64 to the Grand Canyon is beautiful and easy.  Stopped briefly at the unfortunately-now-defunct Canyon Trading Post, which billed itself as the First Authentic Trading Post, established 1889. This is exactly the kind of kitsch I would have loved to see in its heyday. Love the giant kachinas… 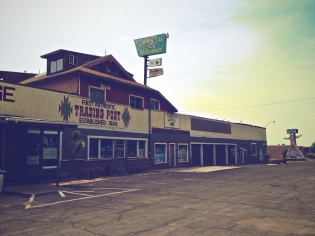 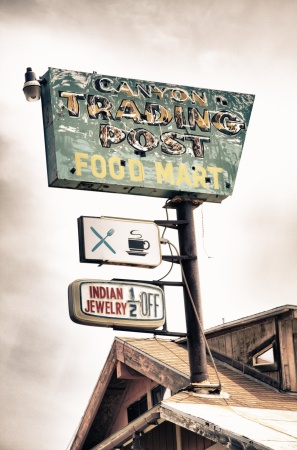 Sunset at the Grand Canyon is something every American should experience in their lifetime. I got to the Grand Canyon about 3:00, more or less as planned, but didn’t count on waiting in line for almost an hour (one-mile back-up) to get into the park. Even the prepaid/pass line wasn’t moving any faster, although that’s what I would recommend for any of the National Parks (the $80/year for all parks pass is a great bargain; the Grand Canyon is $25/vehicle, which is also a bargain; passes at any park or their website).

Like all the other lemmings, I headed to the Visitor Center and Mather Point. I had the circle the parking lots for about 15 mins. to find a spot. Colby LOVED the Grand Canyon! If you want to make new friends fast, travel with a friendly, beautiful dog. I overheard dozens of comments about how gorgeous he is (he is a pretty boy!), and one guy saying “I wish I had a dog to take to cool places”. Mostly, people not traveling with their dogs were missing them, and just needed a friendly pet, which Colby happily obliged. He even met his first real Aussie (reminder: Colby is a purebred Australian Shepherd…and a rescue…you can adopt purebreds)!!! And he met a female Elk, who really couldn’t be bothered. 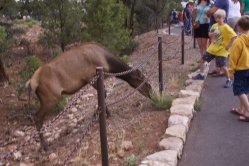 Colby was not impressed 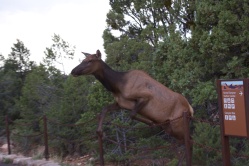 Makin’ a break for it!

Colby was not impressed

He behaved so well in such a large group of people (imagine Disneyland, but spread out more), but I must admit it’s a little more difficult to get great photographs when one arm is leashed to a 60-pound beast. It’s a lot of work to travel by yourself with a large dog, but it’s a compromise that I happily make — I meet so many nice people when I travel with my dogs, including an adorable middle-aged biker guy from Jackson, Texas, who was missing his overweight Daschsund.

We managed to miss thundershowers for most of the day (it’s monsoon season in northern Arizona) (not kidding – that’s a real thing), but got caught as we were entering the park. Afternoon showers are normal this time of year, and they were completely bearable, and provided those lovely clouds that photographers love. And the lightning and thunder were far enough away to be impressive and dramatic, but not dangerous. But best of all, after enduring a few showers, we were rewarded with a stunning sunset. 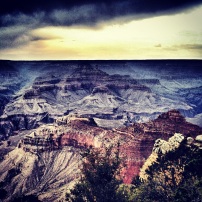 I stayed as long as there was an orange glow, then hit the road to Flagstaff, where we hit the kind of thunderstorms you see on the nightly news. You know that iconic view of a two-lane highway through a desert-scape with a lightning bolt in the distance? (I think it’s also a movie production company logo; I should know which one, but that part of my brain is in hybernation). Well, I actually saw that! Drove through a brief downpour that would worry any other California gal, but I grew up in Missouri so didn’t even blink.

Arrived at the Travelodge on Route 66 – great location. It’s clean and nice, but was pricier than I wanted, but Flagstaff was completely booked this weekend and I didn’t make rez until last week, when I was sure of my departure date. $134/night, including the $10 dog fee. TRAVEL TIP — I almost always call the hotel directly to make reservations – they often can accommodate you even when online sites say there is no availability. When I called they quoted a rate of $135, plus $10 pet fee, but I mentioned that I saw it for $110 on Booking.com and the woman immediately said that she could match any online price. 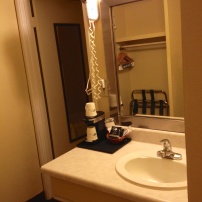 Mixed reviews here. Unfortunately, they had no record of my request for a first-floor room, because of the dog. I was so tired that I would have been OK with the second floor, but the stairs to the second floor were those industrial metal stairs that they use at ski resorts, which have razor-sharp surfaces that would have shredded a dog’s paws. And they advertise themselves as Pet Friendly, but there is not a single patch of grass here, or a dog area. I would call them barely Dog Tolerant. But the woman at the front desk was very nice and, after telling me there were no first-floor rooms available, managed to find one for me. And the room was very nice. Not that I care, but the pool was not available (not even any water in it), and the pool area was being used to store mattresses (!). Oh, and they forget to tell me when I booked that they are directly across the street from the railroad, with trains coming through all night (fortunately, the A/C was so loud that it basically drowned out the trains). I was so tired, I didn’t really care.