Wyndham Airport, $130/night
This unexpectedly-beautiful hotel sits about 300 yards from a runway at the Quito Airport, yet we never heard a single plane both nights we stayed there. It’s a great place to stay if you’re between flights in South America. It’s new, the rooms are big, there’s a restaurant on-site, it has excellent air conditioning (don’t under-estimate that!), and the staff is fantastic. The only con is that it’s 45 minutes away from Quito, so you have to make arrangements if you want to go into town (the hotel can help).

As I look back at this past year, and forward to more interesting travels in 2020, I’m amazed at the things I saw in Ecuador…the Galapagos Islands, on my bucket list for years; the Amazon rainforest, a place I never expected to find myself; and lovely Quito, the capitol of Ecuador.  And it was all one trip, organized by Adventures for Solo Travelers.

Quito is a dichotomy, as are most cities. The Old Town, where tourists are usually herded, is centered around a square of beautiful Spanish colonial buildings, and is the very first city designated a UNESCO landmark. But, like any city, there is poverty and homelessness.  Ecuador is currently being invaded by Venezuelan refugees, fleeing the violence and political unrest there. They’re the people you see on the shoulders of the highway, usually in green vests, selling ice cream.

While I never expected to visit Quito, I found myself there this past May with a couple of extra days, on my way to and from the Galapagos Islands and the Amazon rainforest. On our first day in town we booked a tour with Latin Adventures, and our tour guide, Diego, turned out to be a local treasure. He is fiercely proud of Quito and Ecuador, and was a stellar ambassador for his country. The father of two boys, he travels 1.5 hours each way by bus to his job. He is an excellent tour guide. He and a driver picked us up at the Wyndham in a beautiful, clean van and dropped us off at the end of the day.  We were a group of 4 and paid $118 each, plus an additional $40 charge because the Wyndham is so far away from the city (45 minutes). There was another woman in the van so it wasn’t completely private, but she quickly became part of our group.

I obsessively shoot from cars.  The photos aren’t usually great, but sometimes you capture a moment. Individually, they’re just moments. Collectively, they tell a story. But the story’s up to you. I don’t think you can get to know a city if you don’t drive through it (or, even better, walk through it if you have the time).  My hope is that I’m sharing my journey with you. 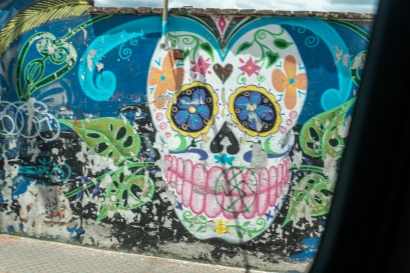 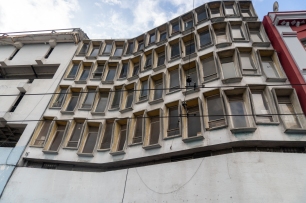 Houses in Quito often have top floors with nothing but rebar sticking straight up – future additions for future family. Also, if your house is not finished, you don’t have to pay “finished house” taxes.

Spanish Colonial history — the Spaniards came to Ecuador in the 1500’s and enslaved the Ecuadorians for 300 years. So the Spanish architecture is a point of pride and pain — pride because the gorgeous buildings were erected by indigenous people, but they were enslaved at the time. 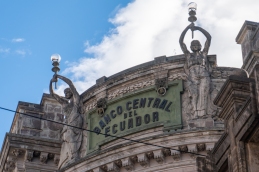 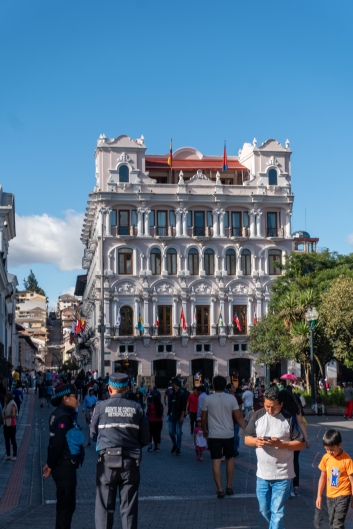 The square is pretty much always filled with people — locals enjoying the day and the music, plus tourists. There are women in traditional garb, often with a baby on their back, carrying armfuls of beautiful scarves for sale. I paid 2/$5. Ecuador is known for oil, textiles, chocolate, coffee, leather, and tagua jewelry. Everything’s super-cheap and you don’t have to worry about money exchange — Ecuador is the only South American country that uses the US dollar (which also makes them a target for immigrants trying to make US$ to send to their families). 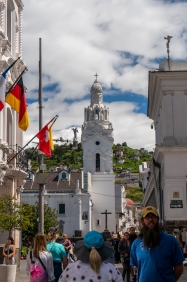 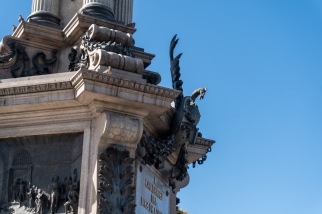 TIP: Just buy the chocolate if you’re hungry – don’t waste time in a chocolate factory. It’s not that interesting and chocolate doesn’t transport well for souvenirs.  It’s really good, though! 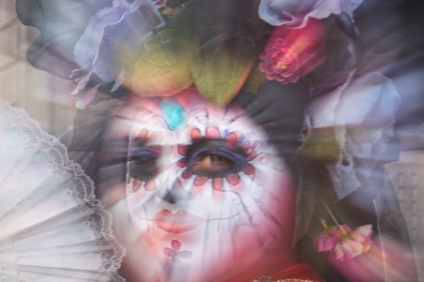 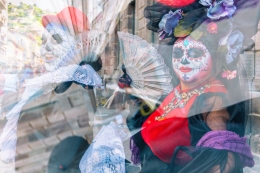 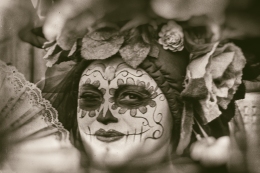 When I travel internationally I pack just a carry-on and a backpack (which is filled with my laptop and camera equipment), so I don’t have to worry about losing my luggage at the beginning of a trip. But I use an expandable carry-on that I can stuff and check on the way home, and also bring (or buy locally) an extra duffel-type bag that I can pack with souvenirs. In Quito I bought scarves and chocolate (which was a melting mistake). The scarves are sold by indigenous women in the square in Old Town, and cost about $2.50 each.  I was also able to buy an alpaca wrap for $10!

The women are lovely and not too pushy, but I felt bad that they walk around in hot indigenous clothing carrying heavy stacks of scarves, often with a baby on their back.  They pose willingly for photos, and I was happy to support their efforts.  And the scarves are gorgeous and easy to pack.

The church of the rich. The many churches in Quito have hierarchies. The Basilica was for the rich.  In Old Town, we saw a beautiful cathedral and, right next to it, another church with an ornate facade but no paint — it was the church for the slaves.

The Notre Dame-inspired gothic Basilica is spectacular, even among the many spectacular churches of the world that I’ve seen — Notre Dame, St. Paul’s Cathedral, Westminster Abbey, St. Patrick’s Cathedral. 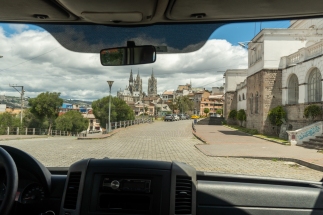 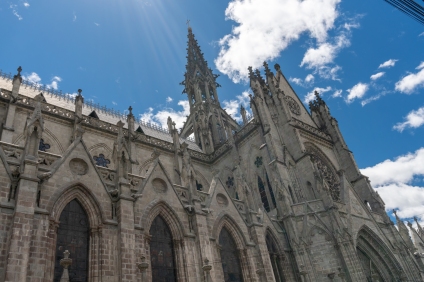 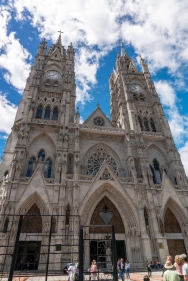 Diego took us down a wobbly plank walk behind a chainlink fence in the attic, and up a steep ladder that I never would have dared to do without him. We emerged at the base of one of the spires for the most spectacular 360 (around the spire) view of Quito. There was yet another steep ladder for one more flight up, but that looked way too janky, so we settled for spectacular. 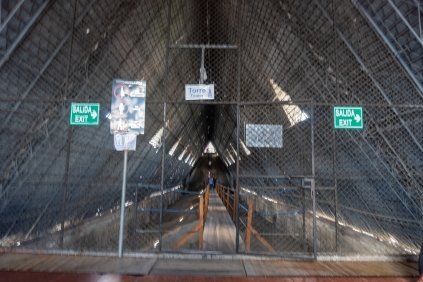 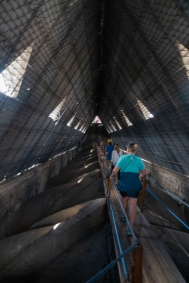 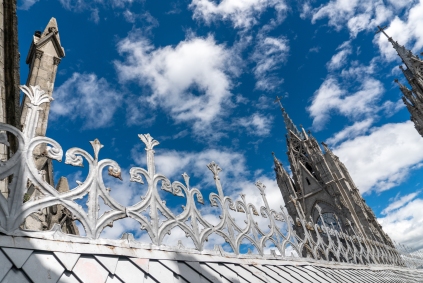 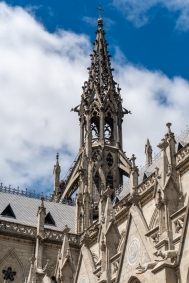 The animals depicted are the animals of the Galapagos Islands, another detail I would have missed if not for our Diego. 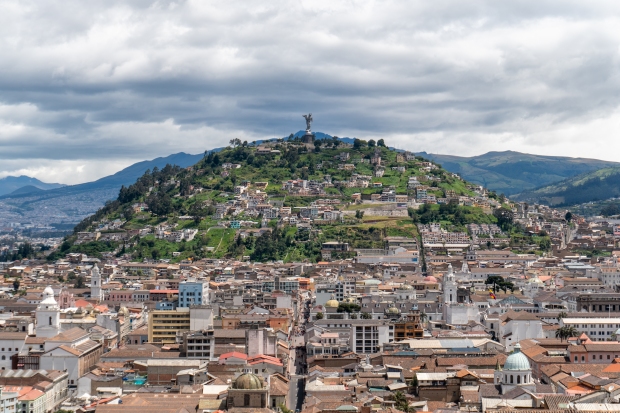 There’s some debate between the two equator museums. Mitad del Mundo seems to be the fake equator, according to the local experts, but it’s the monument that gets all the Instagram credit.  We spent time at the Museo Intinan, and the experiments we saw there certainly seem to prove it’s legit. You know how you always heard in grade school that water drains clockwise in the Northern hemisphere and counter-clockwise in the Southern hemisphere? It’s true! And right on the equator… it goes straight down the drain. But the most dramatic part of the experiment is that you only have to be about 2 feet away from the equator line to see the difference!  And yes, you can balance an egg on a nailhead on the equator. 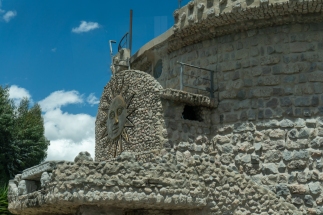 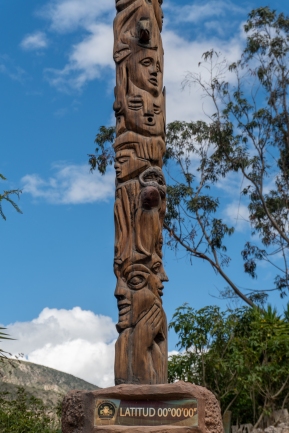 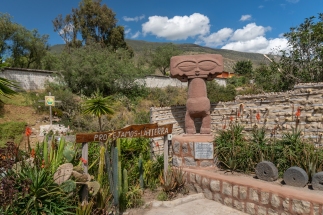 Plan to spend a couple of hours there to get the most out of it. You’ll start with a guided tour that includes those fun equator experiments plus a great history of the area. There are also exhibits and gift shops to explore, and a small cafe for a cold drink.  Make sure you get your passport stamped! 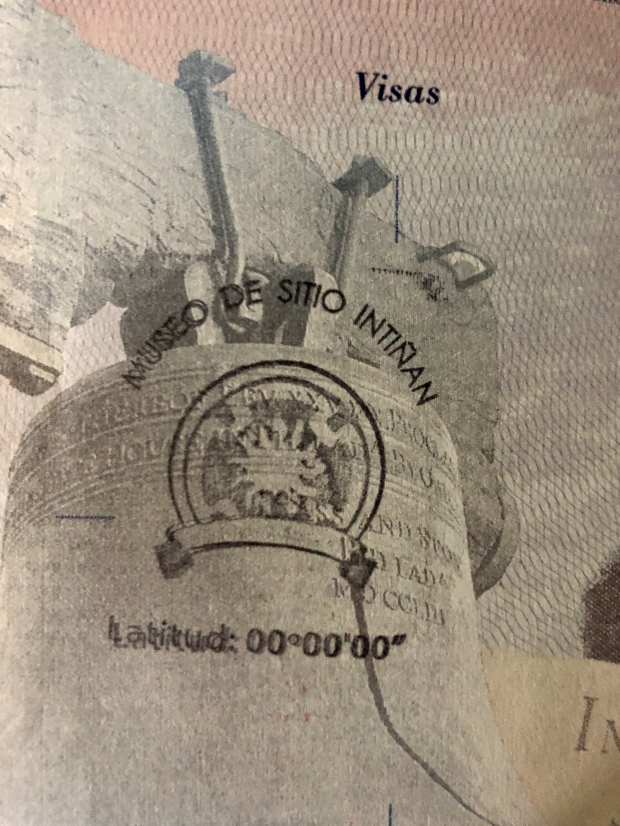 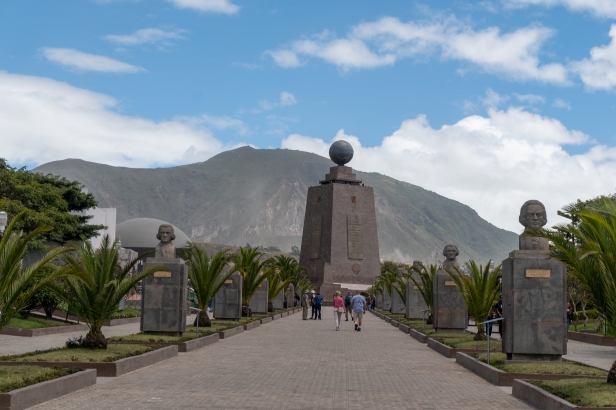 The “other” equator, Mitad del Mundo, is a mile or so away from Museo Intinan and is very tourist-friendly.

It’s right next to the Unasur headquarters  — a spectacular but virtually-abandoned building that has hosted only one meeting of the Union of South American Nations in its tumultuous history.

March 14 (UPI) — Ecuador, which houses the headquarters of the Union of South American Nations, announced its departure from the group and requested the return of the organization’s main building.
Ecuador President Lenin Moreno said Wednesday night that his country requested the return of the Quito building that houses the organization, known as Unasur, which is valued at roughly $40 million, El Telegrafo reported. 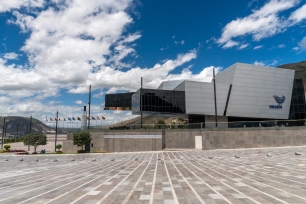 The Virgin, overlooking all

From Wikipedia:
The Virgin of El Panecillo, also known as the Virgin of Quito from the sculpture of the same name, is a monument in Quito, Ecuador. It is located on the top of the hill of El Panecillo, a loaf-shaped hill in the heart of the city and serves as a backdrop to the historic center of Quito.

With a total height of 135 feet (41 meters) including the base, it is the highest statue in Ecuador and one of the highest in South America (taller than the Christ the Redeemer statue in the Brazilian city of Rio de Janeiro). It’s also the tallest aluminum statue in the world.

Looming over the city, we saw the Virgin all day from nearly every corner of Quito.  I couldn’t wait to get up there but, unfortunately, we spent too much time at the chocolate shop and ended up with only 20 minutes at the hilltop, after dark.  The next time in Quito, I’ll make it a priority to visit during the day. 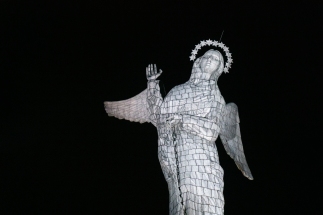 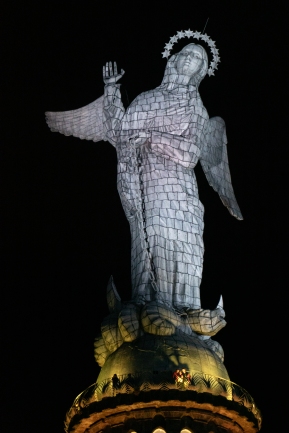 One thought on “Ecuador: I Can’t Quit You, Quito”